A big heart for big animals!

Elephants are not only the largest land animals, they are certainly also among the most popular ones. Every child knows and loves the gentle giants. We humans have always been fascinated by their way of life, family structure, intelligence and their extraordinary appearance. Elephants are admired in zoos, used as work animals, or are part of religious cults and ceremonies. The most beautiful thing, however, is to watch wild elephants in their natural habitat.

To do this you have to travel to either Africa or Asia. Because only here do the last three survivors of the once species-rich Proboscidea still occur today.

What distinguishes all elephants is their trunk, a fusion of the elongated nose and upper lip. What we do with our hands, elephants do with their trunks. They can carry heavy loads such as tree trunks, pick up the smallest objects such as leaves, handing out pats or - if necessary - beatings. The trunk is also used for drinking, as a tool for feeding and food preparation, for communication by means of various sounds, as a highly sensitive olfactory organ, duster, shower head ... and much more. Simply brilliant, such a trunk! 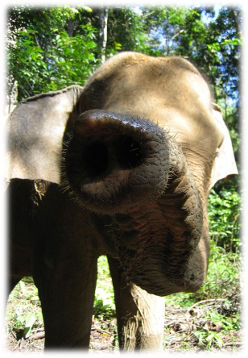 In addition to their trunk, their large ears and columnar legs, elephants are particularly noticeable because of their sheer size. Weight over five tons with a shoulder height of over three meters are not uncommon. Accordingly, their appetite is also huge. Elephants eat around 4% of their body weight per day: for a 5 ton animal that is 200kg! 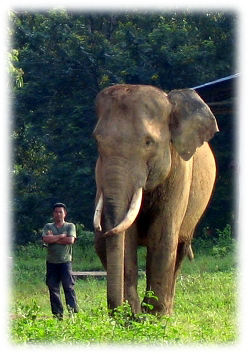 Elephants love water. They like to swim and bathing (also with mud and sand) is part of their daily “personal hygiene”. And of course they also drink a lot: dozens of litres per day, if possible. For water elephants are willing to walk many kilometres per day, even through very rough terrain. The experienced older animals remember every water point precisely and are able to find them again even after many years. 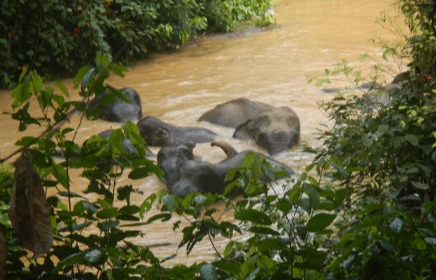 Elephants are very social animals. All animals in a certain area know each other and friendships are maintained over many years. The female elephants, called elephant cows, live in family groups that are mostly composed of closely related animals of different ages. Often three or even more generations live together and form an extended family with more than a dozen members. These families are always led by a matriarch, usually the oldest and therefore most experienced female of the group. If conditions are favourable several families can come together to form a large clan that moves around as a herd for some time.

Bulls (this is how male elephants are often called) grow up within the family they were born into but usually leave the group when they reach adulthood at an age of 10-14. The biological function of this behaviour is to prevent inbreeding. Since all beginnings are difficult, the young bulls often find themselves together in smaller bachelor groups, or follow older, more experienced bulls.

There is no actual mating season for elephants, but fully grown healthy bulls come at longer intervals in a state that is characterized by increased testosterone levels, increased aggressiveness and an increased interest in cows in oestrus: the musth. Musth bulls are generally more attractive to females and due to their aggressive behaviour avoided by other bulls, their mating chances thus increase during this state.

Successful mating is followed by a gestation period of 18 to 22 months - the longest of all land mammals. At birth, the baby elephant usually weighs more than 100 kg, is fully developed, can get up after a few hours and - albeit wobbly – already walk around. It drinks breast milk with its mouth, not with its trunk - it takes time to learn how to "operate" the trunk properly, at first it just more or less dangles around and gets in the way all the time. Such a precision device requires a lot of practice, that´s for sure!